The 9/11 Commission told us that Flight 77 made its last routine radio transmission at 8:51, and the hijacking most likely took place between 8:51 and 8:54. Clear enough. Others have claimed the flight went seriously off course five minutes earlier, though, at 8:46. This has been used both to question the Commission's timeline, and to suggest that this should have lead to an earlier response by air traffic controllers.

Here's David Ray Griffin on the issue, in his book Debunking 9/11 Debunking:

...contrary to the claim that Indianapolis first noticed AA 77's deviation from its flight path at 8:54, NORAD's earlier statement and many news reports said that it went significantly off course for four minutes at 8:46, after which radio contact was lost. It was at this time, therefore, that the Indianapolis flight controller would have become suspicious.
David Ray Griffin, Debunking 9/11 Debunking

Where are these reports? Dr Griffin tells us more in a footnote:

No URLs are provided for these articles, which makes sourcing them rather more difficult.

However, we found a detailed piece in the Guardian for that date (see here). It contained nothing about going off course. We couldn't locate the New York Times story. We found a Boston Globe story for this date (see here), but again there's nothing on going off course. It did contain a useful line, though: "About 8:50, however, Burlingame and Charlebois stopped responding to radio calls, just after controllers in Indianapolis had given them instructions to fly toward a radio beacon in Falmouth, Ky." Perhaps controllers had asked them to change course for some local reason.

We do have the USA Today illustration, however, and that is indeed available at the URL provided by Dr Griffin.

Flight 77's track is the one at the bottom of the map, and as we can see there is a brief but dramatic change in course, as though the plane were avoiding something. But a problem is immediately apparent. The plane took off at 8:20, and disappeared from radar at around 8:56, an elapsed time of about 36 minutes. But the change in course begins before the plane has travelled even half that distance. It seems most unlikely that this manoeuvre started at 8:46: that would leave only 10 minutes for the rest of the visible flight path.

And there's another major difficulty. If you read the rest of the page that Dr Griffin references, you find the author points out that other graphics don't show this diversion:

The most significant difference between this diagram and others published by Time and Newsweek is the path accorded to Flight 77. Only USA Today shows the large hump, an unscheduled detour in West Virginia.
http://www.public-action.com/911/4flights.html

They have the images to prove it, too. Here's one from Time: 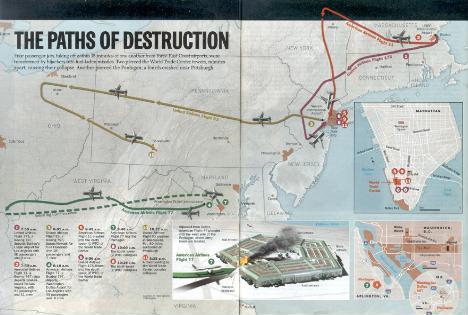 And another from Newsweek: 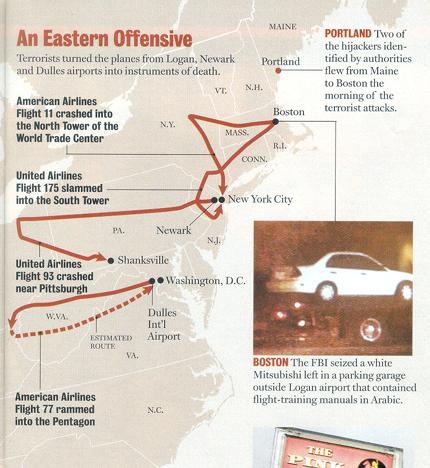 So where did USA Today get this information from? The diagram credits Flight Explorer, a company that provides real-time positional information on aircraft in the US, based on FAA radar information. Flight Explorer provided the following details for the Flight 77 flight path, within days of the attacks:

Now we can see there is a change of course around the middle of the visible flight path, though much less dramatic.

The USA Today graphic claims to be based on Flight Explorer data, then, but it doesn't accurately reproduce it. We've not seen any other images show the same dramatic diversion. The most likely explanation is that the USA Today diagram is mistaken; the artist has taken a quick look at the Flight Explorer image, then drawn something roughly similar over their own map.

The actual flight path would be confirmed later by NTSB-released data, here mapped onto Google Earth: 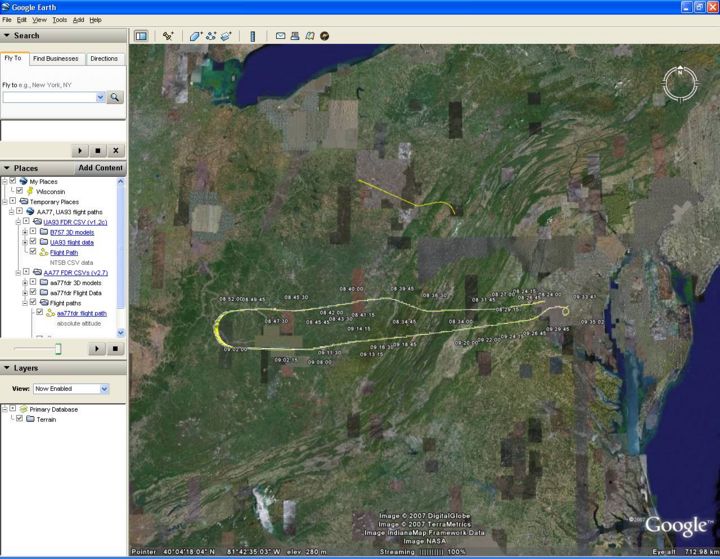 Of course we could still raise the question of why the plane turned right, twice. The real change in direction might not be as significant as USA Today claimed, but perhaps it still means something?

Well, no. We can clear that up, too, thanks to the transcript of air-to-ground communications with the plane, as released by the NTSB:

The USA Today graphic showed a greatly exaggerated turn, then, a manoeuvre that Flight 77 never took. The actual changes in course, at 9:34 and 9:47, were made because Flight 77 was asked to do so by air traffic control. The plane made no unauthorised turns prior to the hijacking, and Dr Griffin's claim that air traffic controllers should have become suspicious at this point is simply incorrect.