Ahmad al Haznawi, a 20-year-old Saudi national, applied for and received a two-year B-1/B-2 (tourist/business) visa in Jeddah, Saudi Arabia. There is evidence that Haznawi may have presented a passport with fraudulent travel stamps associated with al Qaeda. Haznawi listed his occupation as “student” but left blank the line on which he was asked to supply the street address of his present school. He stated that he would provide financial support for his visit. He was not interviewed.
9/11 Terrorist Travel Monograph

Ahmad al Haznawi and Wail al Shehri arrived together at Miami from Dubai, United Arab Emirates. Both Saudis were admitted as tourists for six months by the same primary inspector.
9/11 Terrorist Travel Monograph

The 9/11 Commission report doesn't seem to mention this, but a newspaper article says that al-Haznawi obtained a duplicate driving licence on this day. 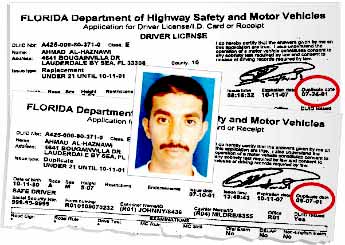