Airfone phone records provide some information on the calls believed to have been made by Barbara Olson. 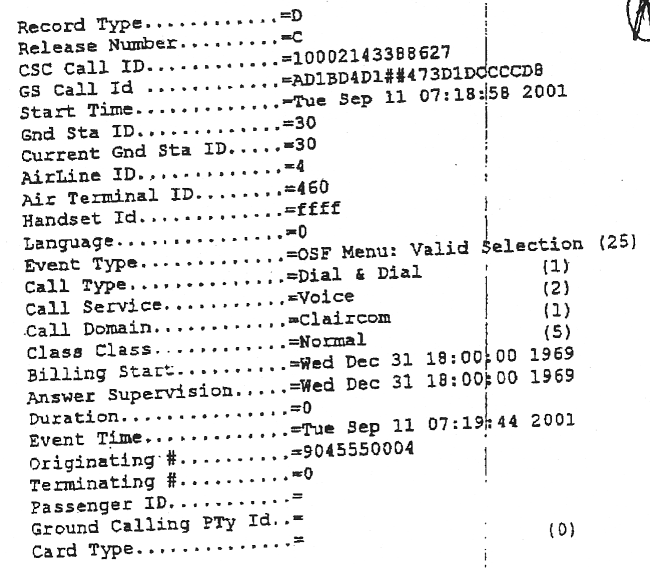 Call #1 to "unknown number", believed to be Barbara Olson to Ted Olson 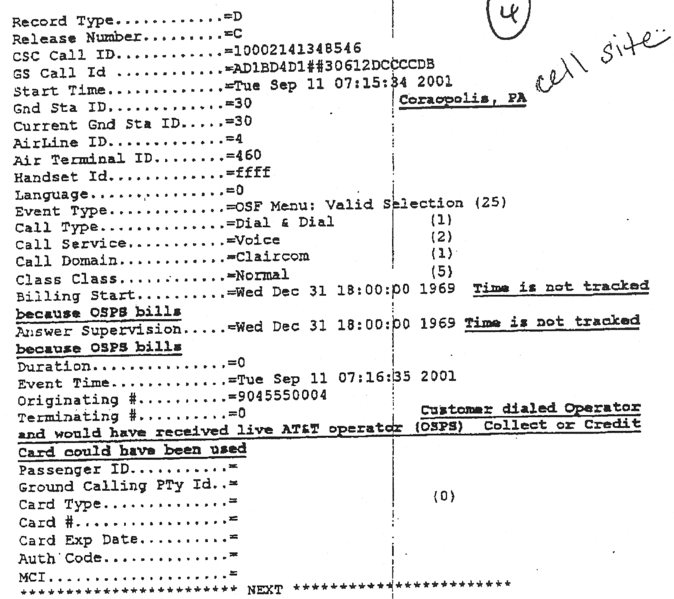 Call #2 to "unknown number", believed to be Barbara Olson to Ted Olson 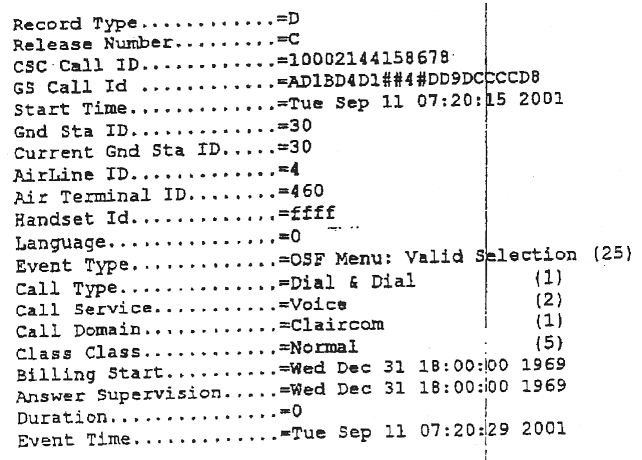 Call #3 to "unknown number", believed to be Barbara Olson to Ted Olson 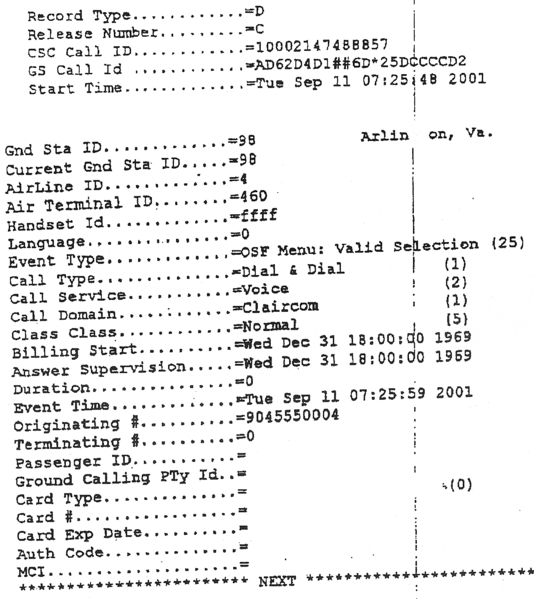 Call #4 to "unknown number", believed to be Barbara Olson to Ted Olson 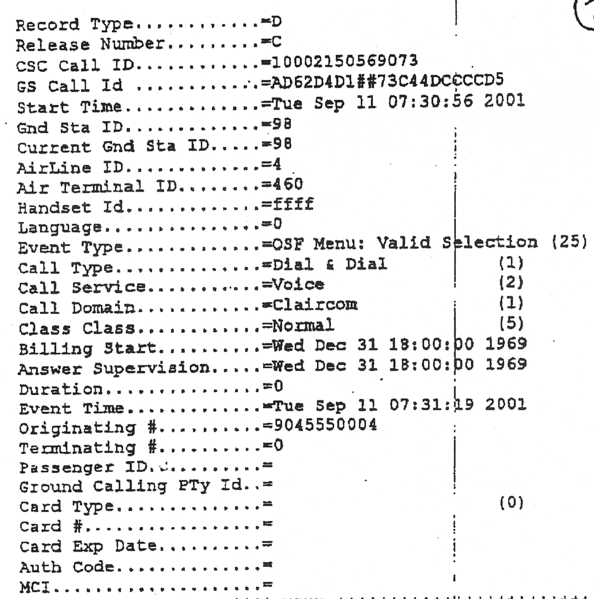 Barbara Olson is said to have called the operator (or perhaps several operators) from Flight 77. Do we know who she might have reached? One candidate emerged from this FBI document:

Teresa Gonzalez, operator for AT&T Services AT&T, telephonically contacted the Federal Bureau of Investigation FBI to report an emergency phone call received by AT&T. After being advised of the identity of the interviewing agent and the nature of the interview, she provided the following information:

Mercy Lorenzo, also an operator with AT&T, received a call from a female passenger on flight 77 requesting to be transferred to telephone number 202514-2201. The female passenger advised the plane was being hi-jacked. Hi-jackers were ordering passengers to move to the back of the plane and were armed with guns and knives. Lorenzo indicated the pilot might not yet be aware of the take over of the plane.

Additionally, the number provided was the number of the passenger's husband. He is a Sergeant and resides in Washington, D.C.
Source

Lori Lynn Keyton was a DoJ secretary working in Ted Olson's office. She reported receiving calls from Barbara Olson on 9/11 in this FBI interview.

Lori Lynn Keyton, Secretary, Department of Justice (DOJ), Washington, D.C., telephone number (202) [redacted, date of birth [redacted] was contacted telephonically at her residence through the DOJ Command Center at (202) 514-5000. After being advised of the identity of the interviewing agent and the nature of the interview, Keyton provided the following information:

Keyton was working in Ted Olson's Office this morning. She is regularly called there to cover the telephones. At approximately 9:00am, she received a series of approximately six (6) to eight (8) collect telephone calls. Each of the calls was an automated collect call. There was a recording advising of the collect call and requesting she hold for an operator. A short time later another recording stated that all operators were busy, please hang up and try your call later.

There was a second telephone call a few to five (5) minutes later. This time Barbara Olsen was on the line when she answered. She called direct. It was not a collect call. Barbara Olsen said, "It's Barbara." Keyton said, "he's on the phone with the command center, I'll put you through."

Keyton advised that there is no caller identification feature on the phone she was using. Keyton didn't know if Barbara Olson was calling from the phone on the plane or from her cell phone.
Source

The FBI interviewed Ted Olson about the calls he had received.

Theodore Olson, Solicitor General, United States of America, was interviewed at his residence, [redacted]. After being advised of the identity of the interviewing agents and the nature of the interview, Olson furnished the following information.

Barbara Olson, Theodore's wife, was a passenger on American Flight # 77, departing Dulles Airport at approximately 8:10am or 8:30am this morning, bound for LAX Airport in Los Angeles, California.

At approximately 9:00am this morning, he did not look at his watch, one of the women in his office advised him of the terrorist attack at the World Trade Center (WTC) in New York. He went to his back office and turned on the television. At that time they were rerunning film of the second plane hitting the WTC.

At this time one of the women in his office told him that Barbara was on the phone. Helen Voss is his regular secretary. She did not relay the call from his wife. It was someone else in the office. At the time he was thanking God that her flight could not have had enough time to get to New York. He picked up the call from his wife and spoke for about one (1) minute. Barbara told him that her plane had been hijacked. She said they had knives and box cutters. He asked if they knew she was on the phone and she replied that they didn't. Barbara told him that they put the passengers in the back of the plane. She had been sitting in first class. Olson's call was then cut off.

After the first call, Olson used his direct line to the Attorney General, but was unable to reach him, so he called the DOJ Command Center and requested someone come to his office. He told them that his wife's plane had been hijacked and gave them the flight number. He wanted to pass this information to someone who could possibly do something.

Shortly after, the same person buzzed him again and said Barbara was on the phone again. Barbara was put through to him. Barbara said the pilot had announced that the plane had been hijacked. She asked Olson what she should tell the captain to do. Olson asked her for her location. She said they were over homes and asked someone else in the plane who said they were traveling North East. Olsen told his wife that two planes had been hijacked and hit the WTC. Barbara did not seemed panicked. This call was then cut off. She didn't manifest anything about a crash. Olson then went back to the television and learned of the crash at the Pentagon.

Barbara did not say anything to describe the hijackers, but did refer to them as "they". She told him "they" had knives and box cutters. She did not make any statements about the hijackers stabbing or slashing the passengers.

Barbara Olson's cell phone number is (202) 365-5889. Olson doesn't know if the calls were made from her cell phone or the telephone on the plane. She always has her cell phone with her.
Source