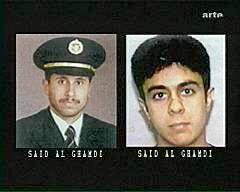 CNN showed several pictures of who they claimed were the 9/11 hijackers in a report on 16th September. Some of these showed different individuals than those depicted in the official FBI photo list, though, released 11 days later. The CNN picture of Saeed al-Ghamdi showed this Saudi pilot, for instance, who had nothing to do with the attacks, and bore no resemblance to the later official FBI photo of the hijacker Saeed al-Ghamdi. (Source)