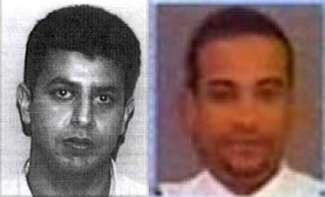 CNN showed several pictures of who they claimed were the 9/11 hijackers in a report on 16th September. Some of these showed different individuals than those depicted in the official FBI photo list, though, released 11 days later. This shot compares an FBI photo of Wail al-Shehri with the image that appeared in the CNN clip. (Source)