Difference between revisions of "Comparing costs"

We've often read comparisons between the funding of the 9/11 Commission and other major inquiries, which appear to make a case that the Commission didn't have nearly enough money to carry out a thorough job. Here are a couple of examples.

But are these figures telling the whole story?

On January 28th 1986 the Space Shuttle Challenger broke apart 73 seconds into its flight. The craft disintegrated over the Atlantic Ocean, resulting in the deaths of its seven crew members.

The resulting investigation was an expensive business, involving many factors. This initial working paper reveals an important detail:

The Challenger accident will create two major kinds of costs: reconstitution costs--or those for the investigation and attendant shuttle system modifications and replacement of equipment--and operating costs--or the costs and savings stemming from a lower-than-planned flight schedule...

Preliminary NASA estimates of shuttle system reconstitution costs are $240.5 million in 1986 and $245 million in 1987. These estimates do not include the cost of an additional orbiter. This first class of costs includes the expenses of the investigation, problem correction (system modification), and the replacement of lost equipment. Table 2 presents a preliminary estimate of these costs, by item, broken down by spending authority in 1986 and 1987 and balance to completion. A balance of $205 million would be deferred to future years. The bulk of these costs concern modifications to the shuttle system that will stem from information gathered by the investigation. NASA estimates these costs will be at least $350 million: $200 million in 1986, and $150 million in 1987.

These estimates could be low. Currently, NASA estimates the cost of the investigation to be between $40 million and $65 million, with salvage costs, the largest single investigation expenditure, ranging from $30 million to $50 million...
http://www.cbo.gov/doc.cfm?index=6240&type=1

An estimated $30 to $50 million on salvage alone? It's clear that the Challenger investigation involved huge costs that simply didn't apply to the 9/11 Commission, and so to make a fair comparison we would have to strip those out.

So, revealing that "$75 million was allocated for the 1986 Challenger disaster investigation" doesn't provide the information we need to know. How much of that was spent, and how much on a secondary investigation comparable to the 9/11 Commission: interviewing people and assembling data, not retrieving the craft or reengineering technology? We need a breakdown of the final costs and what was involved before we can determine how useful a comparison this might be.

On February 1st 2003 the Space Shuttle Columbia disintegrated over Texas during re-entry into the Earth's atmosphere, resulting in the deaths of its seven crew members.

Headlines did indeed say the resulting investigation was allocated $50 million, but once again it's important to read the details (our emphasis):

NASA gets $50 million for shuttle investigation

Congress and President Bush set aside $50 million to help NASA pay for its investigation of the shuttle Columbia disaster.

President Bush signed an omnibus bill into law Thursday. Congress added the money shortly after the loss of Columbia on Feb. 1.

The money may be used to cover the costs of the investigation and also costs related to correcting problems with the shuttle or pay other unforeseen costs.

The law recognizes also that costs could exceed the $50 million and allows for NASA to seek additional funding.

The amount was set based on the general cost required to investigate the Challenger disaster of 1986.

"We do not have a contingency for this," NASA Comptroller Steve Isakowitz said. "It doesn't represent an estimate from NASA."

The overall cost of the investigation is unclear, but three other issues remain in limbo from a budgeting standpoint: - The recommendations that come out of the investigation. - How the investigation affects the space station program. - Whether NASA should build a new shuttle to replace Columbia or build an orbital space plane, which would serve as the follow-on to the shuttle...

Isakowitz said it could take years to find all of Columbia's pieces, scattered possibly over several states. He said also it was unclear whether Columbia's investigation will be quicker or slower than Challenger. The Rogers Commission's investigation of Challenger was completed in six months, but it took more than two-and-a-half years before another shuttle flew...

"I said just use as a benchmark the fact that it cost $75 million to do the investigation for Challenger," he said. "We need to jumpstart NASA now to ensure we have this robustly handled." As for replacing the lost shuttle, Nelson said he'd prefer to see an accelerated effort to develop the orbital space plane...
http://billnelson.senate.gov/news/details.cfm?id=244274&

This money is to include "costs related to correcting problems with the shuttle or pay other unforeseen costs", then - it's far more than 9/11 Commission-style travelling, interviews, meetings and hearings.

There was a Columbia Accident Investigation Board created, though, that might provide a more reasonable comparison with the Commission. They were audited by the Office of the Inspector General, whose final report on them said:

There may have been some additional costs after this, but then again the CAIB were more involved in primary investigations, as Spaceflight Now reported:

The 13-member Columbia Accident Investigation Board, under the leadership of retired Adm. Harold Gehman, spent seven months investigating the Feb. 1 Columbia disaster, reviewing more than 30,000 documents, conducting more than 200 formal interviews and collecting testimony from expert witnesses. The board also oversaw debris recovery efforts in Texas and Louisiana that involved more than 25,000 searchers. The investigation is expected to cost $19.8 million when all is said and done.
http://spaceflightnow.com/columbia/report/030826report

The CAIB had considerably less people than the 9/11 Commission, and worked for a much shorter time. They did some similar activities, but were also involved in primary investigations in a way that didn't apply to the Commission. So can we say conclusively that they were significantly better funded? Not really: it all depends on what they were doing, and how much was spent on things like overseeing "debris recovery efforts... that involved more than 25,000 searchers". There's not enough information here to draw any firm conclusions.

Our original claim suggested that $40 million was spent investigating the Clinton-Lewinsky affair. True? Here's one report:

That brings expenses so far for Starr's five-year investigation of the president, first lady Hillary Rodham Clinton and their associates to $47 million. More than a quarter of that was spent during the Monica Lewinsky investigation and the impeachment.

With the investigation continuing, Starr is on the brink of becoming the most expensive independent counsel ever.

$47 million is the closest figure we have here, but that's expenses for the complete five-year investigation to that point, which was into far more than Lewinsky.

(Note also that Starr's figures included "$1.5 million for costs of U.S. Marshals Service, FBI and Justice Department employees detailed to Starr's office". Did the 9/11 Commission have significant assistance from employees of other agencies, and if so, does the budget cover their costs? If not, then just like the Space Shuttle investigations, this figure is including costs that don't appear in the 9/11 Commission figures, making it a poor comparison.)

Is there a figure that relates to the Lewinsky aspect of the investigation alone? Yes: or, at least, an estimate.

45. What is the best estimate of the total cost to the government of the OIC investigation of the Lewinsky matter, including OIC staff salary, travel, and detailee salaries?

The OK’s financial accounting system does not categorize costs by case or project. For the period January 15 through August 31, 1998, the OIC estimated the time spent on the Lewinsky investigation by all staff members and allocated certain other general costs based on those estimates. The estimated costs are as follows.

These costs do not include payroll costs of FRI personnel assigned to the OIC or certain administrative costs incurred by the Administrative Office of the U.S. Courts and periodically charged to the OIC. The OIC has not developed more current cost information.

The actual figure will be higher than the $4.4 million detailed here, then, but it's not going to reach the $40 million in our original claim.

How much did the 9/11 Commission cost? The Commission's "Frequently Asked Questions" page provides some information:

What is the Commission's budget?

The Commission is confident that it can fulfill its mandate with this amount. We appreciate very much the support of Congress and the President for this level of funding.
http://govinfo.library.unt.edu/911/about/faq.htm#q5

We'd have preferred a final figure, but this will do for the moment: $15 million.

Of course this wasn't the only Government funding that went into investigating 9/11. There was the Joint Inquiry in 2002, $600,000 for the ACSE reports on building performance. Then there's also NIST, who say they "received $16 million for the investigation in September 2002 from the fiscal year 2002 supplemental appropriation" (source) for the initial investigation. We've read talk of additional funding later or another $2 million, perhaps more, and presumably the WTC7 investigation required further investments.

If we were to add the primary investigation, for example the FBI's PENTTBOM, then that would add considerably more:

Following the massive terrorist attacks against New York and Washington, the FBI dedicated 7,000 of its 11,000 Special Agents and thousands of FBI support personnel to the PENTTBOM investigation. "PENTTBOM" is short for Pentagon, Twin Towers Bombing.
http://www.fbi.gov/intelligence/di_timeline.htm

Our ensuing investigation of the attacks of 9/11/01—code-named “PENTTBOM”—was our largest investigation ever. At the peak of the case, more than half our agents worked to identify the hijackers and their sponsors and, with other agencies, to head off any possible future attacks. We followed more than half-a-million investigative leads, including several hundred thousand tips from the public. The attack and crash sites also represented the largest crime scenes in FBI history.
http://www.fbi.gov/pressrel/penttbom/penttbomb.htm

And an OIG report revealed that FBI agents and support staff had spent almost 4 million hours on the investigation by June of 2002. 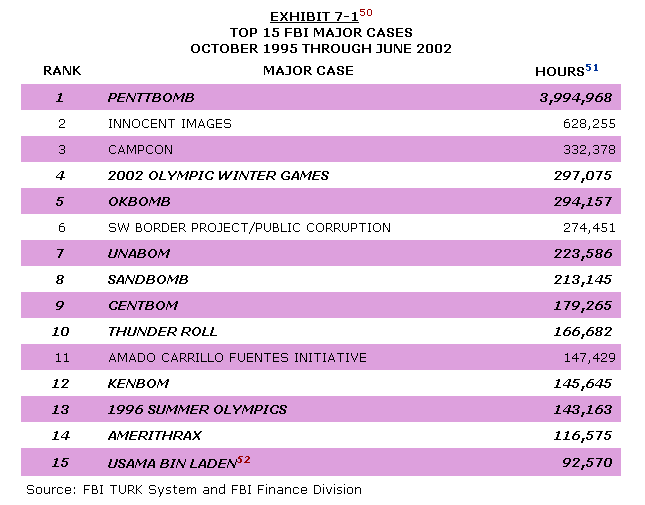 If someone were to say, then, that the initial 9/11 Commission allocation of $3 million was a joke, because it was less than the cost of investigating Clinton/ Lewinsky, then we'd have to agree.

Unfortunately few people stop there, instead resorting to dubious comparisons that overestimate the cost of earlier investigations and minimise the amount of money spent on investigating 9/11.

So while there's the kernel of a reasonable point here, grossly misleading lists like those at the top of the page do nothing to illuminate it: you don't find the truth by making things up.