President Bush arrived at a Florida school shortly before the second plane hit the World Trade Center, and the world suddenly realised that the first impact was no accident. However he continued with his photocall, and when that had ended, remained at the school while making phone calls, and wouldn't leave until around 9:35. What does this mean? Illarion Bykov and Jared Israel believe there's only one explanation:

Given the Secret Service's obligation to protect the President;

Given the Secret Service's open line to the FAA and therefore its knowledge that a plane had been hijacked and subsequently ploughed into the World Trade Center;

Given the potentially deadly threat to President Bush if he proceeded to a public place, on schedule, as announced the day before and known to everyone in the region;

There is only one explanation for the Secret Service allowing President Bush to take the deadly risk of going to the Booker School on the morning of September 11th.

George Walker Bush knew the plans for 9-11. And because he knew those plans, he knew that nobody was going to attack the Booker School.
http://emperors-clothes.com/indict/indict-3.htm

We're constantly told that no, 9/11 wouldn't have required a lot of people to pull off, compartmentalisation and the "need to know" would have limited those with inside knowledge. And yet claims such as this keep adding more people to the list. Because plainly, you couldn't simply have one or two security service personnel knowing Bush wouldn't be attacked: it would have to be all, to avoid confusion and people speaking out. And enough of the hierarchy for them not to be disciplined about it later.

If this were true, then the conspirators have now got another large group of people who, if any of them were to go public, could blow the whole story. Because it doesn't matter what else they know, simply saying that they knew Bush was safe would be a serious leak. And the gain to the conspirators of letting these people know is what, exactly? How does giving the security service advance knowledge of the attack, then letting them behave in what's claimed to be an unrealistic way, help the conspiracy at all?

Let's also remember that Bush was also criticised for his actions after leaving school, as he flew around the country rather than return to Washington. Are we to believe that he knew he was safe in Florida, but believed he might still be in danger afterwards? What kind of faulty foreknowledge is this?

Perhaps there's an alternative explanation for the actions of the security service, then. Maybe they weren't sure where to take him, for instance. How did they know that the attackers might not be relying on Bush being moved? Perhaps there was a truck bomb waiting for Bush to be moved to the airport. Maybe there was an ambush planned there. What if Air Force One was the target? The Security Service staff at the school with Bush did not have an overview of what was going on, and as Bush was in an area that was secure on the ground, at least, then surely it's reasonable to take time to consider where Bush should go next. And take guidance from someone who was in the loop, back at the White House.

Those who suggest this wouldn't be reasonable at all point to Cheney as one possible example:

Meanwhile, Secret Service agents burst into Vice President Cheney’s White House office. They carried him under his arms—nearly lifting him off the ground—and propelled him down the steps into the White House basement and through a long tunnel toward an underground bunker. Accounts of when this happened vary greatly, from 9:06 [New York Times, 9/16/01 (B), Telegraph, 12/16/01] to after 9:30. [CBS, 9/11/02, Washington Post, 1/27/02] Cheney’s own account is vague and contradictory. [Meet the Press, 9/16/01] The one eyewitness account, by White House photographer David Bohrer, said it happened just after 9:00. [ABC, 9/14/02 (B)] It’s easy to see why the White House would have wanted this event placed at a later time (after Bush’s initial statement to the nation rather than after the second crash) to avoid the obvious question: if Cheney was immediately evacuated, why wasn’t Bush?
http://www.cooperativeresearch.org/essay.jsp?article=essayaninterestingday

However, it's not exactly clear what this is supposed to prove. If Cheney was immediately evacuated, then doesn't that show he, or at least his security service team, didn't know what would happen? And in terms of the action they took, Cheney was simply moved from one part of the White House to a more secure area. There's no plausible way this could expose him to risk, which isn't something you could say about moving Bush.

Of course the problem with discussing this, is most of those involved have no real idea what they're talking about. I'm a Brit: even if you like what I do on this site, why should you trust my guesses about US security service procedure? And much the same applies for those on the other side of the argument. Unless they have an in-depth knowledge of situations like this, why should you take their opinions as fact?

So let's forget our opinions, then, and look at an account of how this was seen on that day. It's the one Richard Clarke gave us in his book Against All Enemies, and while brief, it's still interesting:

The television screen in the upper left was running CNN on mute. Noticing the President coming on, Lisa turned on the volume and the crisis conference halted to listen. "...into the World Trade Centre in an apparent attack on our country."

During the pause, I noticed that Brian Stafford, Director of the Secret Service, was now in the room. He pulled me aside. "We gotta get him out of there to somplace safe... and secret. I've stashed FLOTUS". FLOTUS was White House speak for Mrs Bush, First Lady of the United States, now in a heavily guarded, unmarked building in Washington...

"Can you work with Brian", I told [Franklin] Miller. "Figure out where to move the President? He can't come back here until we know what the shit is happening."..."
Page 6, Against All Enemies, Richard A Clarke

Bush delivered his remarks at around 9:30, so if Clarke's timeline is correct then the Director of the Secret Service is only now organising a move. It appears Stafford doesn't want to simply "get Bush out of the school", either -- he wants assistance in planning what their next move should be, from Clarke, who was the man in charge of the White House Situation Room at the time. Which surely was a reasonable idea.

Anyone intent on proving conspiracy could spice this up with guesses, assumptions and speculation, obviously. They might move on to say this simply proves Stafford wasn't doing his job properly, say. Or maybe Clarke lied about the whole thing to provide a cover. Of course a simpler explanation might be that the actions of Bush's security detail on 9/11 weren't so hard to understand after all, to those with real inside knowledge. 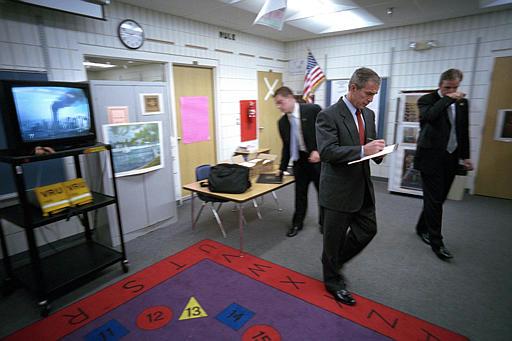