B-25 hits the Empire State Building

9/11 wasn't the first time that a large plane had hit a tall building in New York, as this article recalls:

It may be "obvious" that a heavy plane hitting a skyscraper would deliver a "tremendous" shock, but it doesn't follow that the building must therefore collapse. In 1945 the Empire State Building was hit by a B-25 bomber, but it was still standing last time I saw it. "Ah yes, but it was the impact plus the fires!" Well, when the B-25 hit the Empire State Building "its fuel tanks were reported to have exploded, engulfing the 79th floor in flames"...
http://www.serendipity.li/wot/other_fires/other_fires.htm

The maximum speed of a B-25 ranged from 275 mph to 315 mph, depending on which version it was, and as the B-25 pilot was flying through fog it's unlikely he would reach that. Cruising speed was 230 mph, and we've seen estimates that the plane was travelling at more like 200 to 225 mph.

A quick kinetic energy calculation shows how much of a difference this all makes.

And the differences don't stop there.

The B-25 had a "normal total fuel load of 974 US gallons"; a proportion of this would have been used already in the plane’s flight. By comparison, "it has been estimated that both UA Flight 175 and AA Flight 11 were carrying about 10,000 gallons of fuel when they impacted".

The end result of this was considerably less impact damage, as this photo shows. 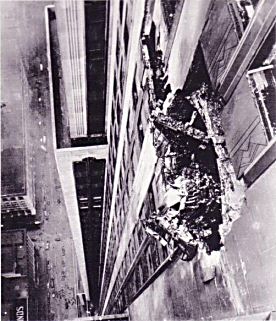 Less structural damage meant no real issues in terms of supporting the load of the building above (which was constructed entirely differently from the WTC anyway). The considerably reduced fuel load meant fire was less of an issue, and the blaze that did arise was brought under control without much difficulty:

The 4-alarm fire brought every available piece of fire-fighting apparatus to the scene. As the building was evacuated, firemen spent about an hour extinguishing the flames.
http://www.damninteresting.com/?p=179

At first glance it might look like the B-25 crash has some relevance to 9/11, then, but the facts say otherwise. The two events bear very little comparison, and it should be no surprise that they also had such very different outcomes.