On May 8, Rababah went to Hazmi and Hanjour’s apartment to pick them up for the trip to Connecticut.There he says he found them with new roommates—Ahmed al Ghamdi and Majed Moqed. These two men had been sent to America to serve as muscle hijackers and had arrived at Dulles Airport on May 2. Rababah drove Hanjour to Fairfield, Connecticut, followed by Hazmi, who had Moqed and Ghamdi in his car. After a short stay in Connecticut, where they apparently called area flight schools and real estate agents, Rababah drove the four to Paterson to have dinner and show them around. He says that they returned with him to Fairfield that night, and that he never saw them again.

Abdul Aziz al Omari, a Saudi, applied for and received a two-year B-1/B-2 (tourist/business) visa in Jeddah, Saudi Arabia. There is strong evidence that Omari presented a passport containing the travel stamps now known to be associated with al Qaeda when he applied for this visa since the fraudulent stamps predate this application. Moreover, his application was incomplete, and he listed his home address as a hotel in Jeddah. He was not interviewed. His application was processed through the Visa Express program and was submitted by Attar Travel.
9/11 Terrorist Travel Monograph

Abdul Aziz al Omari and Salem al Hazmi arrived at JFK Airport in New York from Dubai, United Arab Emirates. Both Saudis were admitted as tourists for six months by the same immigration inspector. Omari’s passport was doctored, containing what we believe are the same fraudulent travel stamps associated with al Qaeda. The passport survived the attacks on the World Trade Center because Omari’s luggage never made it onto the plane when he transferred from his flight from Portland, Maine. Salem al Hazmi’s passport contained an indicator of possible terrorist affiliation. We know this because a digital image of Hazmi’s passport was found on a hard drive in a safehouse in Pakistan.
9/11 Terrorist Travel Monograph

On August 7, Atta flew from Fort Lauderdale to Newark, probably to coordinate with Hazmi. Two days later, Ahmed al Ghamdi and Abdulaziz al-Omari, who had been living in New Jersey with Hazmi and Hanjour, flew to Miami—probably signifying that the four hijacking teams had finally been assigned. While Atta was in New Jersey, he, Hazmi, and Hanjour all purchased tickets for another set of surveillance flights.
Page 248, The 9/11 Commission Report 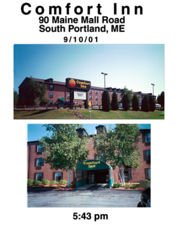 A high-resolution shot from the gas station was later released at the Moussaoui trial.

While Atta had been selected by CAPPS in Portland, three members of his hijacking team—Suqami,Wail al Shehri, and Waleed al Shehri—were selected in Boston.Their selection affected only the handling of their checked bags, not their screening at the checkpoint. All five men cleared the checkpoint and made their way to the gate for American 11. Atta, Omari, and Suqami took their seats in business class (seats 8D, 8G, and 10B, respectively). The Shehri brothers had adjacent seats in row 2 (Wail in 2A,Waleed in 2B), in the firstclass cabin. They boarded American 11 between 7:31 and 7:40. The aircraft pushed back from the gate at 7:40.
Page 2, Chapter 1
9/11 Commission Report

5:33 am ATTA and AL-OMARI checked out of the Comfort Inn.

5:43 am ATTA and AL-OMARI checked in at US AIRWAYS counter.

5:45 am ATTA and AL-OMARI passed through airport security.

6:00 am ATTA and AL-OMARI departed on Colgan Air en route to Boston, Massachusetts.

The FBI asks anyone who has seen these individuals in Portland, Maine, on the evening of September 10th and/or the morning of September 11th and can provide additional information, contact the Boston FBI at (617) 742-5533. The corresponding photographs can be viewed at WWW.FBI.GOV.